I’m fresh off of seeing Once Upon a Time in Hollywood, which I thought was incredible, but I’ll leave it at that since this isn’t a review. I do, however, need to give the tiniest of spoilers with this one simple, and possibly surprising, fact: the movie doesn’t have a single utterance of the n-word. That, my friends, is progress. The lack of n-bombs seemingly comes at the detriment of not having a single black speaking role in the movie, but some progress comes at the expense of others, I guess.

Tarantino’s scripts have never shied away from the word, and his bold use of it has even created some iconic movie lines, for better or worse.

But there’s one of his films that particularly sticks out to me in its flagrant use of the word. I’m talking about The Hateful Eight. 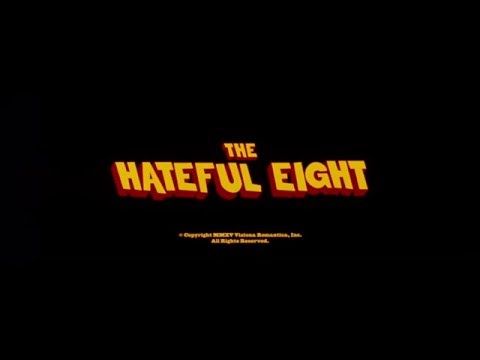 Watching The Hateful Eight can at times be an uncomfortable experience if you’re not someone who delights in hearing white people saying the N-word. A more prudent writer might have prepared for this article by watching The Hateful Eight and counting every utterance of the word, but that sounds like a great way to go insane, so I skipped that. Plus, if you’ve seen it, you already know exactly what I’m talking about.

Don’t get me wrong, I love the movie. I saw it in 70mm and watched the four-part episodic series on Netflix. I’m not saying that wins me the “biggest fan” award, but suffice to say, I am a big fan of the movie. And no, this isn’t me flexing my woke muscles either, mostly because I don’t think it’s a particularly heroic stance to say that white people saying the n-word makes you uncomfortable.  As a screenwriter myself, it just brings up one one simple question: how do you give that script to someone for notes?

You’d have to expect the first note you’d get is, “maybe less of the n-word.”

OK, so maybe the note “less n-word” doesn’t give Tarantino enough credit as a writer who knows what he’s doing. Let’s go with the note, “I know that it’s probably historically accurate, but at what cost?” That’s part of what makes the word work in his films, after all. The word always fits with how the characters would talk, whether due to the setting, time, or characters in the scene, but is that level of accuracy in historical fiction even necessary? Will the audience be taken out of the movie because the characters aren’t using that common vernacular of the time? Or will they be taken out of it because at this point, that vernacular is jarring no matter the context?

I know Tarantino hand writes the first draft of his scripts, then types them out page by page using some old half-computer/half-typewriter thing, so this is more of a rhetorical question than anything, but at what point do you CTRL-F the n-word, see that you’ve used it 37 times, and then decide, “maybe I can delete a couple of these.”

The argument against everything I’m saying here could be made as simple as “Tarantino is a genius.” That it is exactly his use of bold, unwavering language that makes his work resonate. From top to bottom, this is how he crafts his movies. With unwavering, confident choices that few others would dare to make. There’s an old zen quote that says, “the way a person does one thing is the way they do everything.” How he uses the n-word is the same mechanism he makes all his directorial and prosaic choices with. They simply can’t be parsed.

Maybe that’s giving him too much credit and the movie would be better off with a few less n-words though.

Or maybe he should have added more. Who knows?

Writer for tv and film. Five @ 305 on Primo TV We Are Monsters, upcoming film. View all posts by Joe Cabello