This one’s a little short at just shy of 800 words, but there’s so many jokes it’s almost unreadable! <-That’s a good thing! Hope you enjoy!

A plucky PI users her unconventional methods to find out the truth after an army private gets caught under the influence of marijuana but claims she never smoked.

If you’d like a copy of my Star Wars parody, Scrote One, sign up for my email list (just click here). If you read it and enjoy it, I’d love a review on Amazon. 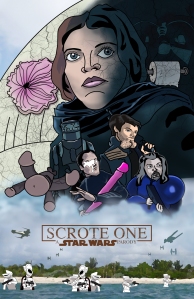 I watched her for a while, hoping I could catch her in the act, but then I feel asleep. I woke up and watched her some more, then slept some more. After getting some good rest and being mistake for a homeless woman, I was ready to approach her.

It was important that we start on the right foot, so I immediately threw a bucket of water on her. She sprang up and demanded to know why I did that. I told her it was because I needed to know if I could trust her.

“How does this help?” she asked, gesturing at her wet body.

“Are you wet right now?” I asked her.

There was a start. She was already telling the truth.

“I’ll tell you the exact same thing I told the police. I didn’t smoke,” she huffed.

I asked her what really happened, and added that she better tell me the truth or I’d punch her in the throat.  What she didn’t know was that I just might have punched her in the throat regardless.

She wanted to know why she should trust me, especially since I dress weird and smelled like gasoline. I told her about my skunk problem, but it didn’t help. Either way, she had started to settle down and dry enough to tell me her side of things.

She said she’d left the base to hang out with a friend. Just a friend. She kept stressing over and over how much he was just a friend. If she said it one more time I was going to start thinking he was more than a friend. She said it again, but I decided to still trust her. She was in the military after all. That should give her some trust points. Truth is, I wanted to believe her, so that I could stop working.

She said she needed to get off the base after all the stress from the military publicity, mixed with her regular army duties. The only person she knew was a friend, Rico, and again, stressed he was a friend, who wasn’t in the military. She barely knew him, but he had a car so he was her way out. She snuck off with him to clear her head in the forest, specifically Lover’s Point. She stressed that it’s not that kind of place. It’s just called that. I’d heard differently my entire life, but like I said, she was military and I trusted her.

While in the car, Rico lit up a joint. It made her uncomfortable, but she didn’t have much choice but to stay in the car. She feared that over time she had gotten contact high, something I’ve only ever heard about as a myth. That’s when some Military police came to surveil the area for trouble, since Lover’s Point is the type of place where people go to have anonymous sex. I mentioned how she’d said it wasn’t that type of place, but she replied with an exasperated sigh that made me feel bad, so I dropped it.

She said that if I couldn’t help her, it would shame her father’s military name. He was a great hero.

It was right then that I saw him standing behind Jessica.

The tall ghost looked back at me.

Can’t win them all.

I assured Jessica I’d get to the bottom of this, then situated a pile of leaves to sleep in. Her phone rang and she excused herself, answering it with a whisper. She told the person on the other end that everything was all right and she didn’t want them to stress.

I couldn’t help but speak aloud, “What are you hiding, Jessica” I turned it into a song that knocked everyone’s socks off. After my standing ovation, it was time to go to the lab.

Let me know what you think in the comments! And make sure to check out my books on Amazon. 🙂

I’d like to cancel my PremiumMasons membership. At first when I found out the Freemasons were offering a paid subscription service I was very excited. As someone who has enjoyed the unadulterated power and wealth from being a Freemason, a premium service sounded like a good idea.

Unfortunately the additional services were lackluster. Being able to choose an animated avatar for the app was cool, but not quite worth the $49,999.95 per month. I was interested in the feature that would guarantee someone in my bloodline to gain public office one day, but since that isn’t something that directly benefits me, it didn’t really sell me. Beyond that, it doesn’t appear that PremiumMasons is all that better than being a Freemason.

I’d like to ask for a partial refund for the second month’s billing (today!) I guess I had my billing date wrong.

He sloppily folded his crushed velvet tuxedo, threw it on top of his dresser, and slid into his pajamas. A boring plaid number, but they were comfortable and consistently warm, no matter what cold, dark recess of the dresser they had dwelled in. Perfect for a nice, long sleep. It was 9:30am and he had earned it.

He’d just come back from a particular difficult night of fighting crime.

It had been months since he’d worn his pajamas to bed. For hundreds of years he promised that he’d never get so lazy to sleep in his crushed velvet tuxedo every night, yet that’s how things had ended up. The tuxedo was as comfortable as a hug after all, and with its multiple pieces, it took a good amount of effort to put on and take off. It was a uniform made for men with plenty of time. Not the normal attire for the year it was, 1984, but he’d given up on living the normal life of a man. He wasn’t a man at all, actually.

He was a Dracula. The 7th to be exact.

And he was brutally heartbroken.

Woe was him. His name was Woe. He was also very sad.

He had become the 7th Dracula exactly 60 years, 364 days, 12 hours, and 59 minutes ago. He hadn’t been around long enough to stop keeping exact count the way his predecessor had by the time they had met. In fact, he still had a good 120 years before he reached his predecessor’s years of service.

His predecessor, a Dracula by the name of Lestat, had told him to stop keeping track of the minutes and hours and days. He warned him that he’d go mad if he did this, though it was perfectly understandable that he did. He gave Woe many different warning throughout his training, as was his job. To pass the torch. To ensure Woe was well equipped for his job as Dracula.

Lestat had been a great mentor. No one, not even Woe could argue that, however, that wouldn’t stop Woe from making the grave mistakes that lead him to his current state of loss and agony.

He had made the terrible, no-good mistake, a mistake he was warned about in his training countless times, of falling in love.

As if that wasn’t bad enough, he had made the second most terrible, no-good mistake a Dracula can make as well. A mistake he was also warned of countless times, though, one wonders if he hadn’t been warned about the second mistake, then maybe he never would have even considered even making the first mistake, as if this warning was proof that the other could be broken – the mistake was turning the woman he loved into a vampire.

I say he turned her into a vampire, not a Dracula, and that is for a specific purpose. They are two different things in the same way a square and a rectangle are two different things. The way a square is a rectangle, but a rectangle could never be a square. I will explain all that later. For now, what is most important are the intricacies of what made this broken heart all the more brutal, which lead to the events of this story. The story of the 8th Dracula, the greatest hero the world had ever known.

It all started when Woe turned his love, Emily, into a vampire so he could be with her eternally.

What he did not foresee, is that despite this gift, she would leave him.

This is a story I’m working on based on a side character in my book I’m editing, Lessons in Debaucery. I’d love to hear your thoughts about it. It’s obviously not very far along, but I hope it gives a good indication of what the story is all about. This will be less of a straight comedy than Lessons in Debauchery, but will most likely still have lots of funny elements because I can’t help it.

While Lessons in Debauchery is a sea of one-liners, He was a Dracula, is a heartfelt comedy.

Please give your feedback in the comments section and I’ll keep writing and posting it. I think I’m going to post this exclusively on this blog until it’s done or someone yells at me to stop.

Graydis was only one of three dragons left in a world once thickly populated with dragons. He was on his way to mate with the last female dragon, Kirdana, but he was dreading it. Kirdana was nice enough, especially considering the slim pickings, but having sex with dragon women was awful.

Male dragons had smooth, almost glass-like phalluses, however, female dragon vaginas were filled with sharp barbs. They were a vestigial trait from eons before to help dragon mate while in the air. Many dragons would slip out in mid-flight. Ironically, the barbs became so awful that the male dragons began avoiding mating at all costs. Most were happy just to pleasure themselves and call it a day. Graydis greatly preferred it. END_OF_DOCUMENT_TOKEN_TO_BE_REPLACED